Meet Nelson, The Newly Born Elephant in the Houston Zoo Joy and happiness greeted the atmosphere as The Houston Zoo experienced a new addition to the family on Tuesday, May 12.

His name is Nelson. And he was born during the early hours of the morning at 6:30 a.m. to a 29-year-old Asian elephant by the name Shanti, after a short period of labor. His weight was a whopping 326 pounds at the point of birth.

Nelson, however, did not experience a very easy and smooth welcome to the world. Exactly one hour after he was born, the veterinary staff and the elephant team at the Houston Zoo saw Nelson bleeding profusely from his stomach.

“Upon further investigation, they determined that he tore a vessel in his umbilical cord during birth,” zoo officials wrote.

“The team acted quickly to sedate the one-hour-old calf and get him into emergency surgery. The Houston Zoo veterinarians performed the 30-minute procedure to find the torn vessel, stop the bleeding, and close the hole in the calf’s abdomen.”

While Nelson remained in surgery, the Houston Zoo’s elephant team collected whole blood from other elephants that make up the herd, should Nelson need blood transfusions.

The team’s training and skill paid off as they were able to calmly and quickly collect about three bags of blood. And although the transmission turned out not to be necessary, the zoo emphasized that the blood will be saved for future needs.

“Shortly after surgery, the team reunited the calf with Shanti,” the zoo wrote. “The calf was soon standing and walking on his own and began to nurse before the day ended.”

And although Nelson isn’t completely out of the recovery yet, the zoo staff is “cautiously optimistic that he will make a full recovery.”

Shanti and Nelson will continue to undergo post-natal exams, as they spend several days bonding. As part of the bonding period, the elephant team is interested in the pair sharing several key moments, such as hitting weight goals and communicating with each other.

Nelson is the last of six calves and has three siblings in the Houston Zoo; a two-year-old Joy, six-year-old Duncan, and ten-year-old Baylor. The zoo now has a total of 11 strong elephants that make up the herd, with six females and five males. 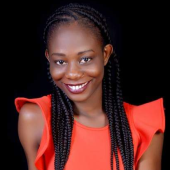 Vivian Gerald is a freelance copywriter who's obsessed with writing. She's been writing since 2009, offering value to businesses and customers. While not writing, Vivian is with beautiful babes with unique health conditions, making sure they're happy as ever.