New Year’s Eve Fireworks in & near Houston – Where To Watch, When & How Much Are you ready to say goodbye to 2021? What better way to ring in the New Year than with fireworks at one of Houston’s several fantastic New Year’s Eve events?

Bringing in the New Year wouldn’t be the same without a fireworks show, but as everyone knows, 2021 has turned our world upside down and led to the cancellation of many major events.

But don’t worry we’ve got you covered. Here are a few locations where you may light up your New Year’s Eve with fireworks.

New Year’s Eve Firework in and near Houston People’s Choice, a variety dance band, will perform live music in the plaza, followed by counting down to midnight with sparkles and a 60-second rooftop fireworks show.

Friends or Family in Town?  Check out Houston’s Top Attractions at 47% DISCOUNT! New Year’s Eve Firework in and near Houston – Continued Head down to Kemah for New Year’s Eve celebrations and enjoyment, with musical performances in the Plaza and a spectacular fireworks show.

When: On the 31st of December free Concert in the Plaza with the timings mentioned below:

Visit the Kemah Boardwalk website to book your tickets and for additional information. On December 31st, join the POST to bring in the New Year with a blast. Skylawn will serve as the launchpad for fireworks in downtown Houston. On Skylawn, at their 5.5-acre rooftop park in the middle of Houston, you can enjoy breathtaking skyline views, cirque-style performances, live DJs, a professional firework spectacular at midnight, delectable adult drinks, and more.

Visit the Eventbrite website to book your tickets for the New Year’s Eve event at Post Houston and for additional information.

Do you know of any spots in Houston where you can see New Year’s Eve fireworks? Comment below with the details! Ring in the New Year with the entire family on 12/31 with “The World’s Fair” themed celebrations, live music, and fireworks! Come for the lights, stay for the fireworks on the 31st of December!!! The 8th annual Sugar Land Holiday Lights features numerous themed displays, a carnival and over 3 million individual lights.

When: On the 31st of December, fireworks begin at midnight!
Where: Constellation Field in Sugar Land at 1 Stadium Drive, Sugar Land, TX 77498
How Much: General admission starts off at $16 for adults and $14 for kids aged 4-12

Check out our Detailed guide for Sugar Land Holiday Lights

Celebrate New Year’s Eve at Redemption Square! From 7pm – midnight, listen to live music on the Lawn while enjoying drinks and bites and Bocca and Lupo. Ring in 2022 with a stunning firework display – we have the best in town! 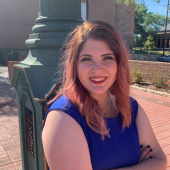 Masey is a writer and native Houstonian dedicated to sharing Houston’s most fun and enticing spots for a budget price. In her free time, she enjoys video games and exploring the Lone Star state.